Sorry for the lack of update last week — after two weeks of heavy productivity on the new draft, my brain was leaking out my ears. I needed a break, and I had come to a point in the story where I was a lot less certain about what needed to be done. I had a change of setting to navigate, a raft of new characters to introduce along with that, and a conspiracy of antagonists to keep in motion while my protagonists tried to figure out what was going on.

I had handwaved a whole lot of that while writing the first draft. Now I had to work out what was actually happening behind the scenes, and which of the new characters were on what side, all while delivering sufficient exposition on my version of the ancient events of the Arthurian universe that the reader would understand what happens later.

For me, working through this kind of problem always means reaching for a piece of paper. I have a lot of pretty notebooks, but over the years my go-to has turned out to be the Moleskine unlined ones with a paper cover. 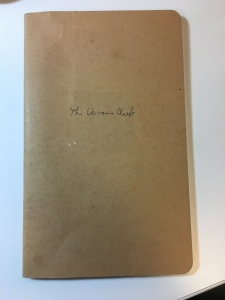 They are pleasant to write in, and they don’t have the “too nice to use” factor, which is important because any notebook I’m actually using will get beat up rather a lot in the course of a project. They have to be unlined, because along with text notes I’m going to be drawing family trees, relationship webs, maps of Faerie, and house plans in them, along with the occasional graph of plot beats.

I know that some writers have A System for their notekeeping, but this is as close as it looks like I’m ever going to come. So I spent two days this week without adding to my wordcount at all, but scribbling notes and drawing maps.

(Also I saw Captain Marvel, which was excellent, and got to hang out with some friends, which doesn’t happen nearly enough, and made an absolutely amazing beef ragu.)

At the end of that time, I felt both rested and like I knew where I needed to go for the next few chapters, and got back to work. The pace has slowed from that first mad rush, but this is probably more sustainable. Wordcount is currently at 32,400.

View all posts by RJ